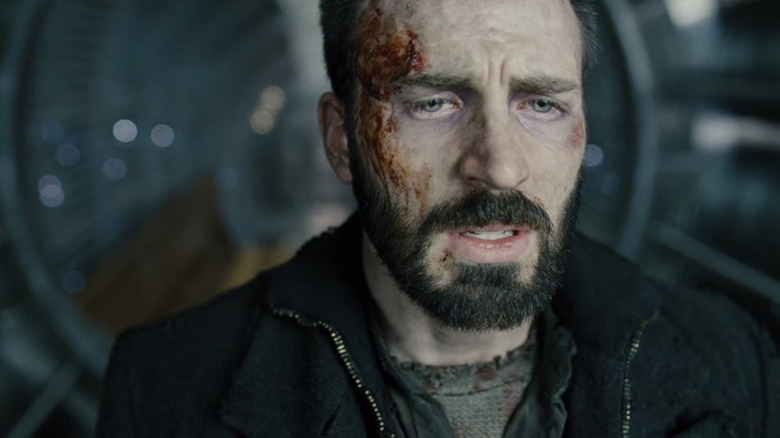 "Snowpiercer" invites the viewer aboard a post-apocalyptic train with a perpetual-motion engine and plot. It's always moving, changing locations, but for all intents and purposes, it's a prison movie. The inmates, led by Curtis (Chris Evans), want to escape but they can only go forward through the same prison on a railway that encircles the world.

We're told, "The train is the world," and characters refer to it as "the whole wide train" and "the train of life." Yet the train in its function as a prison represents a system of control — and a dream of advancement that ends in disappointment. It's a place where armed guards forcibly separate children from their parents at the border (between cars), and where the terror of school shootings endangers other brainwashed kids who have learned to revere a Henry Ford-like captain of industry named Wilford (Ed Harris).

Is it just a coincidence that the actor who played Captain America leads us through this madness?

"Snowpiercer" was the English-language debut of director Bong Joon-ho, who made history in 2020 when his thriller, "Parasite," became the first foreign-language film to win Best Picture at the Academy Awards. Bong also tied Walt Disney's record for four Oscar wins by a single person in a single night, and he became the first South Korean filmmaker to win the Best Director award, beating out Quentin Tarantino, a champion of Bong's earlier films, "The Host" and "Memories of Murder."

A few months after Bong walked away with a handful of golden statuettes, TNT began broadcasting a "Snowpiercer" television series, based on the film and the original French graphic novel it adapted, "Le Transperceneige." Unlike the show, which is still chugging along, the OG "Snowpiercer," Bong's perpetual-motion picture, has a definitive ending that invites examination.

The Prison Train Of Capitalism 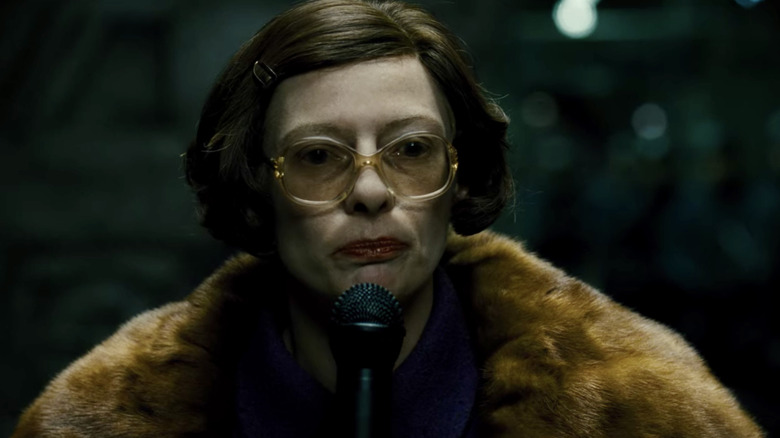 Speaking to Vulture, Bong observed that his movies in the 2010s — "Snowpiercer," "Okja," and "Parasite" — were "all stories about capitalism." Like the son in "Parasite," who envisions buying the house where his father blinks out Morse-code messages from underground, Curtis in "Snowpiercer" wants to free the oppressed underclass from the train's squalid tail section, where the only food is protein blocks made out of ground insects.

Minister Mason (Tilda Swinton) tells him, "My friend, you suffer from the misplaced optimism of the doomed." But Curtis keeps his single-minded purpose, overthrowing the guards, whose guns hold no ammo, and plowing through the train with a battering ram. All he wants to do is get to the front.

Outside, the dispersal of a cooling agent meant to counteract global warming has left the Earth frozen over in a new ice age. All other life is believed to be extinct. Humanity's last survivors live aboard this locomotive ark as it circumnavigates the globe, going everywhere and nowhere fast.

Curtis and his people aren't the first band of revolutionaries to attempt a class revolt. To bypass the gates between train sections, they hook up with a security expert, Namgoong, played by Bong's frequent collaborator, Song Kang-ho. Namgoong and his daughter, Yona (Go Ah-sung) sleep in morgue-like drawers and they're addicted to kronole, a drug made out of industrial waste.

With a series of conceptually and visually inventive set pieces, "Snowpiercer" renders the idea of social stratification as a level playing field where one can never ascend but only make lateral moves, as in a side-scrolling video game. Instead of the semi-basement apartment and sub-basement bunker of "Parasite," we get a procession of cars and a gauntlet of masked men with hatchets and night vision goggles. 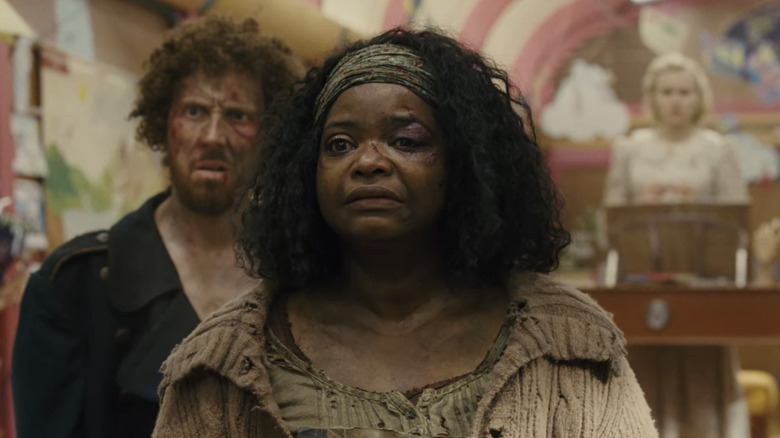 After the tunnel melee leaves their numbers decimated, Gilliam stays behind while Curtis proceeds with a smaller group, including Tanya (Octavia Butler), who is searching for her kidnapped son. They pass through a greenhouse, an aquarium and sushi bar, a meat freezer, and a classroom with a pregnant, gun-toting teacher (Alison Pill), who leads the class in demented Sunday school songs. "What happens if the engine stops? We all freeze and die!"

Their numbers dwindle further as a silent, unstoppable henchman (credited as Franco the Elder, and played by Vlad Ivanov) pursues them with the tenacity of the Terminator through the cars where the rich lounge in luxury and poolside privilege. After a deadly confrontation with him in the sauna, Curtis, Namgoong, and Yona are the only ones left.

Namgoong scoops up more kronole — the opium of the people — in a nightclub and drug den before they finally reach the engine room door, where he and Curtis sit and talk. Curtis has been carrying a dark secret; he confesses to cannibalism, saying there was a time when he and others in the tail section ate the weak.

"You know what I hate about myself?" he says. "I know what people taste like. I know that babies taste best." It turns out that Curtis killed Edgar's mother and was ready to eat him as a baby until Gilliam cut off his own arm and offered it instead.

The Revolution Will Not Be Mechanized 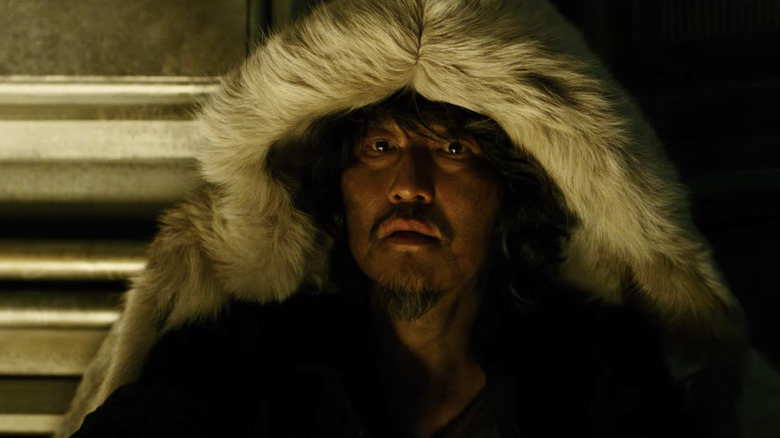 Namgoong reveals that he has been pocketing lumps of kronole, not only because he is addicted, but because they are flammable. Instead of blowing the engine room door, he wants to blow the wall to the outside world. He has been keeping an eye on the same crashed plane outside every year they pass it and believes the snow and ice are melting.

The engine room door opens and Claude (Emma Levie), the plump capitalist kidnapper in bright yellow — who we've seen measuring the length and utilitarian worth of malnourished children in brown rags — appears with a gun. She ushers Curtis into the room and he becomes the first human being to walk the length of the train from tail to engine.

At last, Curtis meets Wilford (Ed Harris), divine keeper of the sacred engine, face to face. If Curtis is Neo, then Wilford is the Architect in "The Matrix Reloaded." He informs Curtis that he and Gilliam were friends and that the leaders of the front and the back were working together, secretly communicating and allowing periodic revolutions to happen as a population control method.

"We are all prisoners in this hunk of metal and this train is a closed ecosystem," he says. It was Wilbur himself who sent Curtis clues on red strips of paper, leading him here. He wants Curtis to be his successor.

Faced with the knowledge that "The Great Curtis Revolution," as Wilford calls it, is a lie, the brown-bearded Curtis stands framed in the engine room's holy light, with a stigmata hole in his hand. He briefly contemplates taking over as Wilford's replacement until Yona comes running in and pries open a floor panel, unveiling Tanya's son, at work within the grinding gears.

This Train Runs On Child Labor 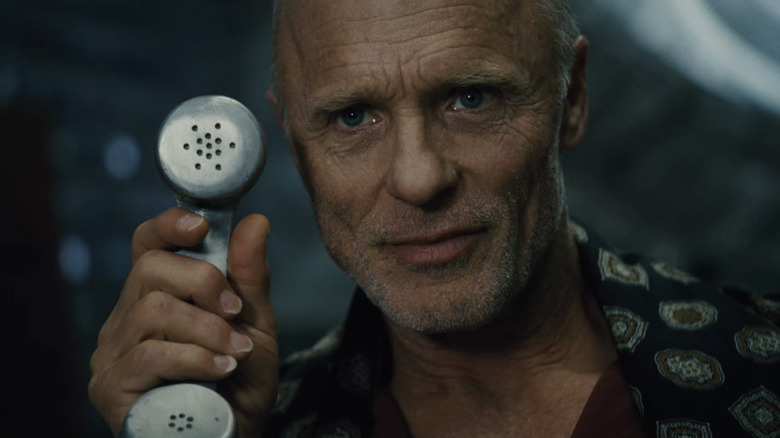 Kids in crawlspaces have taken the place of missing train parts, and they are what keep the engine running. Now, we can see that Wilford and Minister Mason's motorized hand gestures mirror the clockwork movements of the kids as they labor within the machine.

Humans have become part of the apparatus, their bodies exploited as resources. And there is no escape from this prison, not while it's following the same loop, with automatons each occupying their "preordained position," drugged up on kronole and false hope.

Curtis sticks his arm in the gears, offering up his own limb (the way Gilliam did) in a moment of redemption. Yona lights the fuse on the kronole, and she, Namgoong, and Curtis share a group hug as it explodes and an avalanche derails the train. In the end, it's the next generation, Yona and Tanya's son, that comes crawling out of the wreckage, where they get a glimpse of life beyond the train in the form of a polar bear in the snow.

"Le Transperceneige" left the station in 1982, and Bong spent years developing it into a movie before the Occupy Wall Street movement happened in September 2011. However, he brought in American screenwriter Kelly Masterson ("Before the Devil Knows You're Dead) to rewrite the script in early 2012 before the film went into production. When "Snowpiercer" premiered in Seoul in the summer of 2013, it tapped into the zeitgeist and some of the same universal themes that "Parasite" would years later.

"Snowpiercer" offers a dystopian vision of a society with structures that have failed much of its population. While class struggles are nothing new in human history, and South Korea has its own problems with economic inequality, Bong's film delivers a propulsive narrative on a track without borders, asking genre fans to confront their own place within "this one country of capitalism," as he once called it (via Nerdist). Are we on a runaway train, or is it still possible for civilization to right its course before the whole thing derails?

Read this next: 12 Awesome Sci-Fi Movies That Never Got Sequels

The post Snowpiercer Ending Explained: A Jailbreak from the Old World Order appeared first on /Film.