I was an easy mark for the mascot era of platformers, because it simply meant there were way more of the types of video games that brought me the most joy. For whatever reason, though, I never played the Ratchet & Clank games. I didn't jump on the lombax train until the PlayStation 3 era with Tools of Destruction, but since then, I've never looked back. I love the bubblegum aesthetic, the dad jokes, the whole Saturday morning cartoon vibe of fighting the same main bad guy over and over again. Ratchet & Clank feels warm, fuzzy, and pleasant.

Rift Apart, the latest episode in the Ratchet & Clank saga and a rare next-gen game that's actually exclusive to a next-gen platform, is more of the same in the best way. It comes with enough new wrinkles to make it feel fresh again, to the point that it's easy to imagine another handful of sequels coming and going before the series ever wears out its welcome.

This time around, one of the most powerful devices in the universe, the Dimensionator, goes haywire after Ratchet accidentally shoots it, creating randomized and uncontrollable holes between dimensions. Reality is falling apart, and once again, Ratchet and his sidekick, Clank, must put things right. This time, though, they end up in another dimension where they run into their own counterparts: another lombax, Rivet, who also thinks they're alone in the universe and a robot with self-esteem issues. (In this version, the two aren't pals just yet.)

You can play as both, swapping between them for story reasons, though they play identical.

This setup is delightful for longtime fans because it's a giant "what if?" and a chance to recast long standing characters. One character in Ratchet's universe, for example, is white. They're Black in Rivet's.

One of the big pitches for Rift Apart has been how the superfast harddrives in machines like the PlayStation 5 allow Insomniac Games, the developer of the Ratchet & Clank series, to implement new ideas. The dimensional portals are more than just wallpaper—they're interactive. Practically, this means Ratchet and Rivet have access to a really cool grappling hook that lets them bounce around the environment. It's especially useful in combat, allowing you to instantly warp to the other side of an area, and frequently deployed to hide clever secrets in the world, only accessible by finding the warp.

If what you were hoping for, however, is the ability to jump in and between worlds, that's not really what's going on. Dimension warping is not a weapon to be used at will. Again, it's best thought of as a fancy grappling hook—a fast way between and to areas. The most impressive (and they are impressive) world-bending sequences happen during a handful of thrilling moments, and the occasional level where the player can move between worlds to solve puzzles. In the latter example, you're looking for crystals to whack, triggering a switch. That part is cool! It does load really, really fast! And it looks different! But the novelty quickly wears off, and you become more concerned with what's in front of you: solving the puzzle.

It's a cool idea, though, and I hope they find a way to expand upon it in the future. 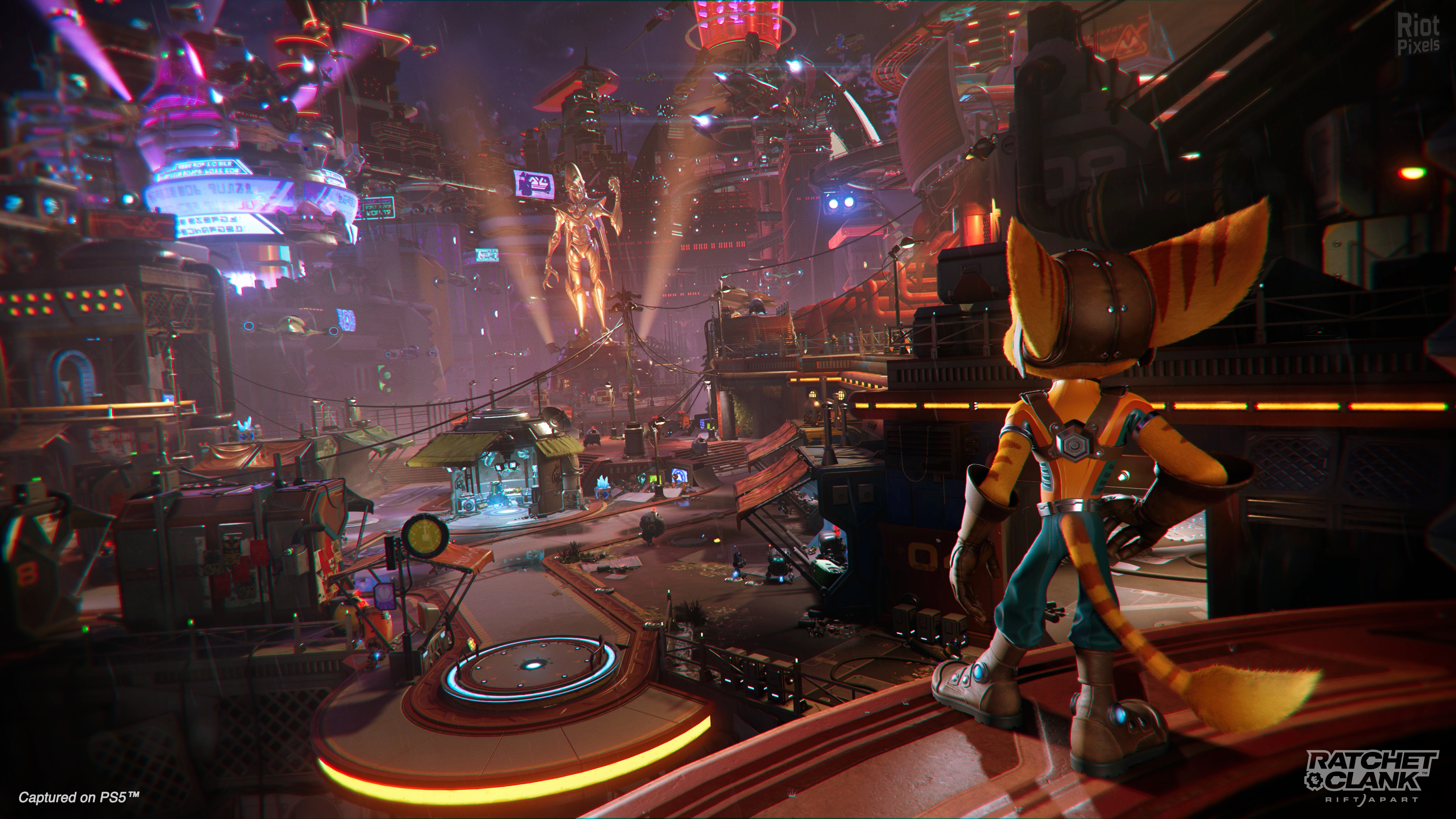 While the trippy dimensional stuff has gotten all the splashy marketing attention, honestly the most impressive and welcomed pieces of this adventure are the new ways to control Ratchet and Rivet. In addition to a useful dash, early on you gain access to a set of rocket boots—not new to the series, necessarily, but what's here is the fanciest version yet—that, with a few taps, feature a turbo mode that sends you screaming across the screen. The dash and boots aren't just for navigating across the much larger maps of Rift Apart, but give players a ton of different options to manage combat encounters, as well. Combine dashing and boot zoomin' with the grapple hooking towards dimensional rifts and it's hard to not get giddy at chaining together the forms of mobility, making playing Rift Apart feel super nimble.

The platforming of Ratchet & Clank have always taken a backseat to combat, but at this point, there are enough movement options in Rift Apart that it would feel totally natural to start leaning more in that direction some more. Quite often, the game tiptoed towards really taxing my brain and fingers with a jumping section, before backing off towards the safety of making sure players kept marching forward. Wall me off in a challenge section next time!

It's fine, though, because Rift Apart has plenty of other ideas with these new tools. The term "open world" is goofy because at the end of the day it just means a big map, and somehow Ubisoft and the Assassin's Creed-ification of the term has severely limited our imaginations. Much of Rift Apart is traditional Ratchet & Clank, with players moving through tightly wound and alternating sections of platforming and combat, but a surprising chunk is in some truly large environments that require traversing, exploring, and picking apart massive spaces.

There's one level in particular set in a sprawling desert—the same place you acquire those boots. When I hit a speed bump and was rocketed into the air, thus revealing the scope of the area in front of me, my heart sang at the prospect of spending the next several hours trying to see everything it had to offer. And that's exactly what I did, slowly filling out the map, following the trail of Rift Apart's well-hidden and satisfying-to-discover collectibles. It's an area that gestures at a way Insomniac could truly reinvent what a Ratchet & Clank game is without losing its soul in the process, and I spent the rest of the game longing for more of it. 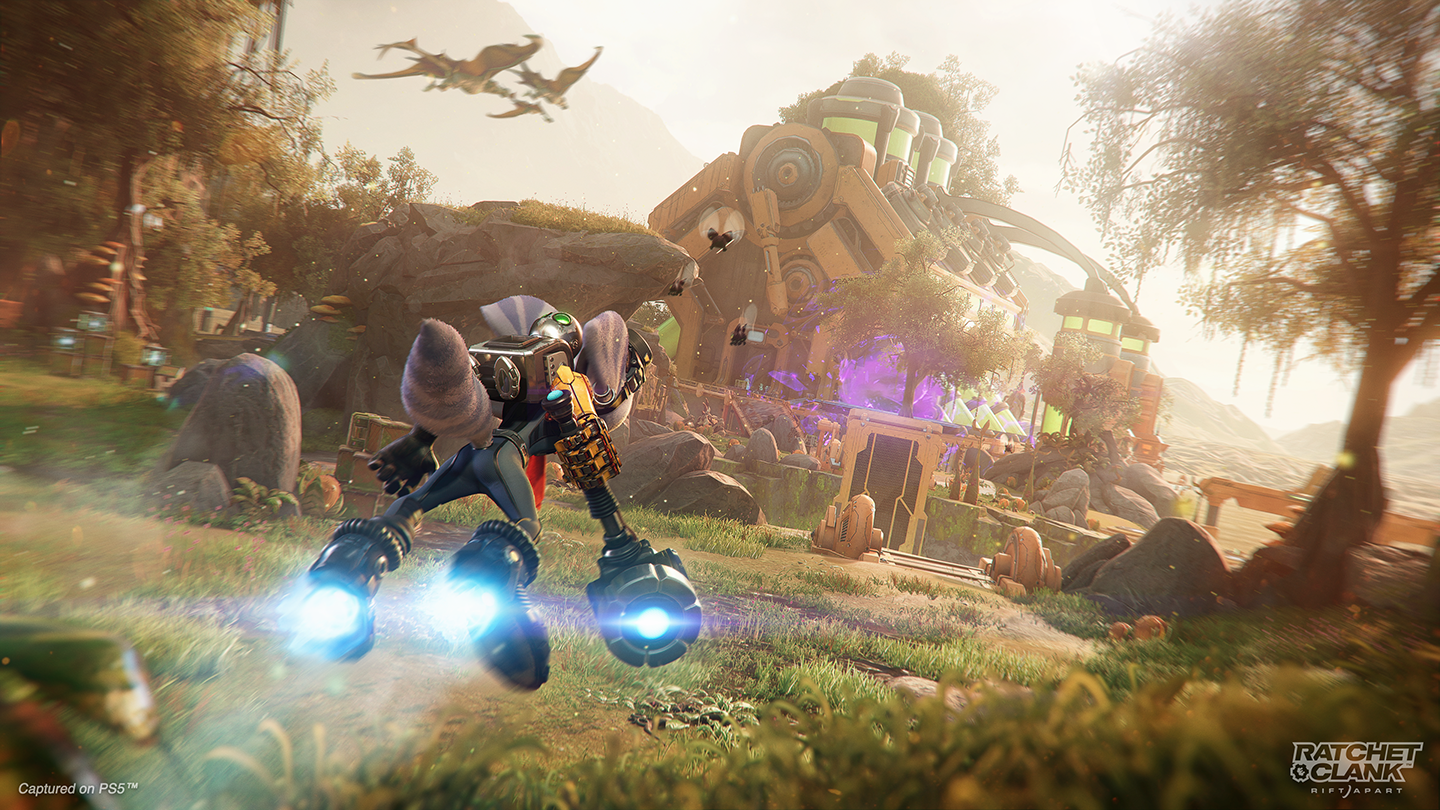 At some point, I wouldn’t be shocked if the series went full RPG. Why not?

One part that hasn't really changed, because it doesn't require anything beyond new and weird ideas, is combat. It's a joy to load a new Ratchet & Clank and marvel at what quirky guns Insomniac's come up with and the different ways you can use them together. You start the game with only a single weapon, but by the end, you have several dozen you can use simultaneously, and it leads to absolute chaos. At one point, I was deploying a set of fungi that could fight enemies, a drone that zipped around taking pot shots, a group of Clank-like robots that ran around deploying punches—all of this before I'd fired a "real" shot. Once you stack on rockets, the ability to turn enemies into ice, lighting bullets that chain together to hurt several enemies at once? Woof, it makes you excited for every new combat encounter.

Plus, I've never been into MMOs, but the way friends talk about their meditative power, it's easy to see why people fall for the simple joy of watching numbers go up. Similarly, I have always loved watching the numbers go up in the Ratchet & Clank games, switching between one of several dozen weapons not because I'm optimizing the best way to defeat the latest onslaught, but because I want to watch the numbers go up on the newest gun I acquired. 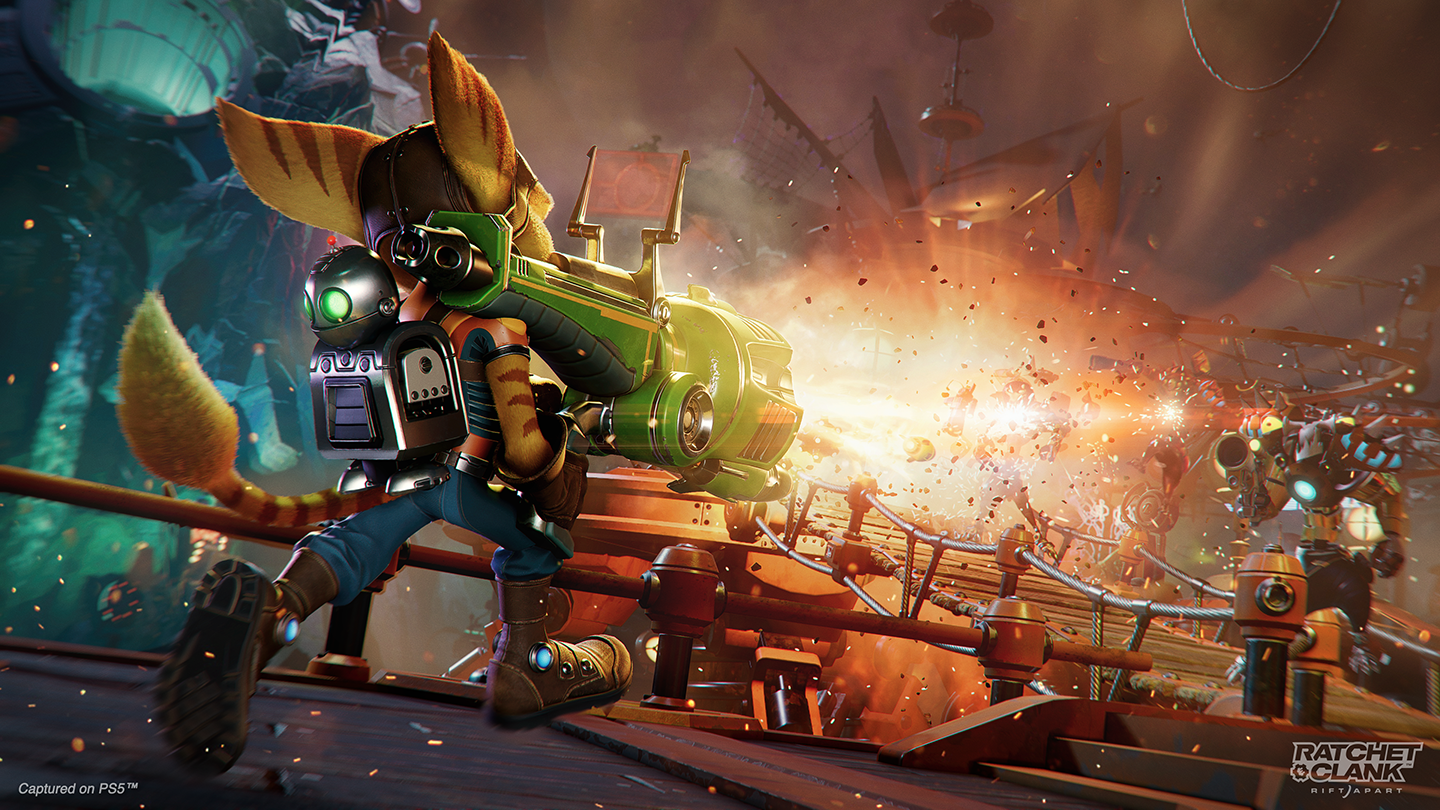 It helps that the weapons gain abilities and look flashier as you upgrade them, but if I'm being completely honest with myself, the main incentive is watching those numbers go up. The way I play these games, I actually stop using the weapons I've max leveled, because I think it's more interesting to be forced to use a set of weapons you're uncomfortable with.

Rift Apart is also, unquestionably, gorgeous. I played and beat it on its default visuals setting, which whips up the fancy ray tracing and 4K resolutions and locks the frame rate at 30 frames per second. The lower frame rate threw me for a loop at first, as I've become more accustomed to playing games on "performance mode," but Rift Apart plays just fine this way and the maximized visuals are a treat. The game also has two types of performance modes—one with limited ray tracing and one without any—that emphasizes 60 frames per second. It's buttery smooth and, obviously, also gorgeous. I only spent a tiny bit of time with the performance modes, as they were patched in last minute. Either way, you're set with a game that wonderfully justifies the time and energy everyone's put into tracking down a PS5.

If you've never played Ratchet & Clank before, this is a great place to start. If you've bounced off the series in the past, I don't know if there's anything here—it's another great Ratchet & Clank game! If you're a longtime fan wondering if the series is out of gas, Rift Apart proves, like Mario, they can make these for another decade and find plenty of ways to make them inventive and interesting all over again by playing with the existing structure.

I finished Rift Apart a few days ago, but my saved game says I've played 98% of Rift Apart, with a few collectibles left to be swept up. You can bet your ass I'm gonna get that last 2%.