Want to know what the top Olympic climbers will wear to vie for the first-ever climbing medals? We got a peek at the athletes’ favorite shoes.

On August 3, a handful of the world-class climbing elite will step onto the stage at Tokyo’s Aomi Urban Sports Park for climbing’s Olympic debut. There, 40 of the best climbers from 19 countries will battle for bragging rights as the first-ever Olympic Sport Climbing Champion.

As climbing teeters on the cusp of its Olympic debut, it’s not just the athletes that have dedicated years of preparation for this event. Competition climbing shoes have evolved at an unprecedented rate in the buildup to the games. Manufacturers pulled out all the stops in a bid to provide the athletes with a range of performance-enhancing shoes.

Every climber is free to choose their own climbing shoes, but like any sport at the highest level, commercial sponsorship will have an impact on many athletes’ choices. The majority of the Olympic climbers have sponsorship arrangements with shoe manufacturers, with a whopping 90% of competitors being affiliated with a shoe brand.

Though sponsorship arrangements may limit the athletes’ choice of climbing shoes, it’s hard to imagine these top athletes would partner with a manufacturer unless they had confidence in their shoes’ ability to help them step onto the Olympic podium.

And be sure to check out our rundown of climbing’s Olympic debut — including rules, scoring, and athletes to watch.

We interviewed a number of climbers taking part in this summer’s Olympics and estimate there will be about 31 different shoe models from 10 manufacturers represented at the games. Of these many competing climbing shoes, here are the 10 we heard will be most used by this year’s Olympic hopefuls. 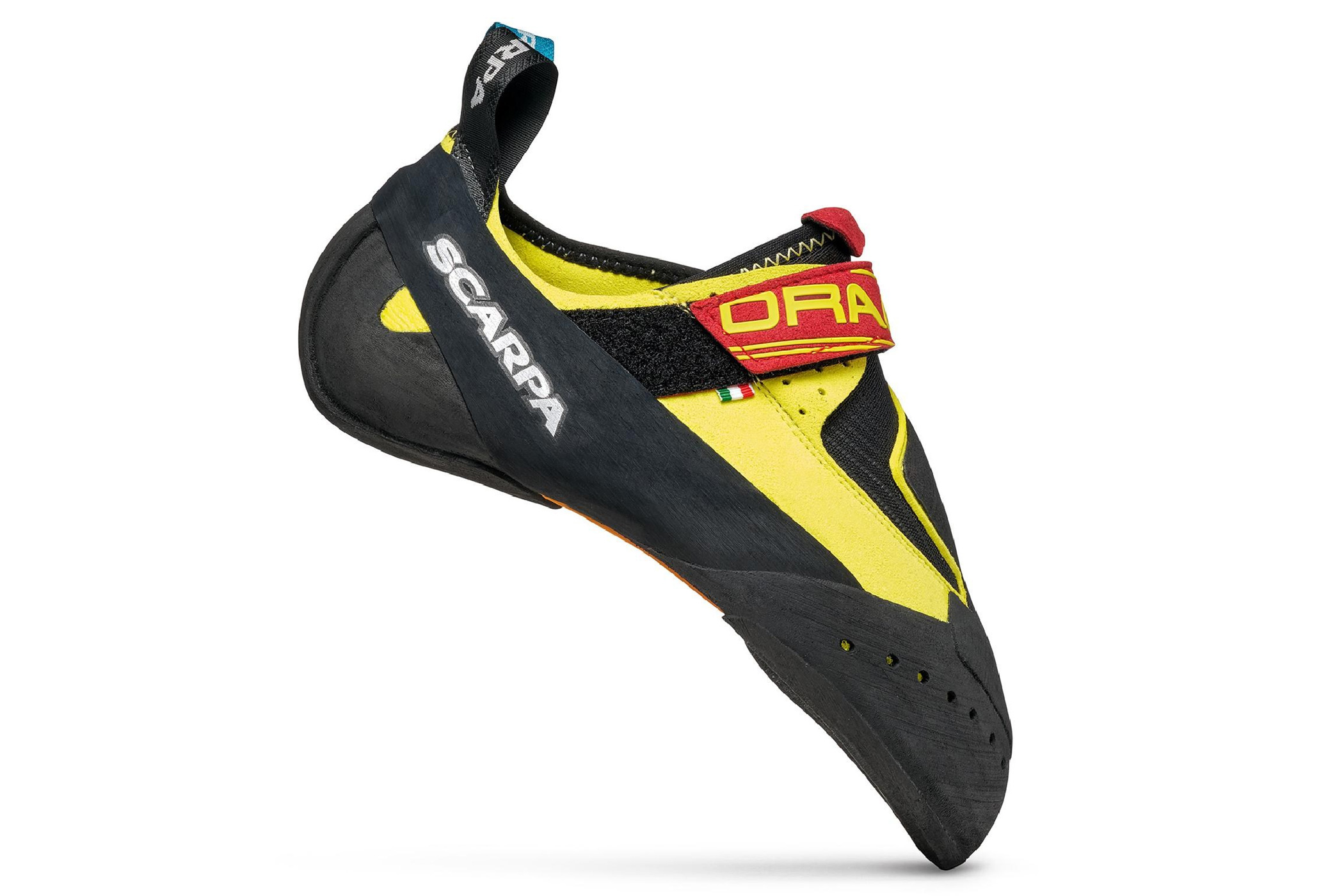 The Scarpa Drago ($189) will certainly be one of the most used shoes at this year’s games, with 11 climbers opting to step out onto the stage donning the Drago. The reason why this shoe is so popular with professional climbers is clear, as it ticks many of the boxes for what a competition climber is looking for in a performance shoe.

With a 3.5mm Vibram XS Grip2 outsole paired with a 1.0mm midsole, Scarpa has produced a shoe with a highly sensitive and flexible profile, ideal for sticking large volumes and friction moves. The SRT toebox is made of ultrasoft M50 rubber, which is great for toe hooking and scumming, as well as assisting in directing power to the top of the toes.

Scarpa opted to use its minimal PCB rand technology, found in many of their performance shoes like the Furia Air and Chimera. This lightweight rand maintains the overall tension and elasticity of the shoe, while minimizing the layers of construction between your foot and the wall.

Canada’s Sean McColl told us it’s the versatility of the Drago that makes them his favorite in the Scarpa range. South Africa’s Erin Sterkenburg echoed this, citing the Drago’s “balance between good edging, while also being soft enough for smearing on volumes” as the reason they have become her go-to shoe.

Perhaps an even bigger testament to the pedigree of the Drago is the fact that 80% of unsponsored Olympic climbers have chosen to use the Drago for at least one discipline.

This is undoubtedly one of the most popular gym shoes for amateurs and professionals alike. The Drago retails for $189 from REI, Backcountry, and Amazon. The newly released low-volume variation is also available here.

As the name suggests, the Solution Comp ($185) is an upgrade from the classic Solution, with the addition of some serious performance enhancements.

While the front half of the shoe follows a near-identical construction to the original Solution, a noticeable difference is the enlarged Vibram XS Grip2 toe patch, which allows for greater friction on toe hooks and coordination moves.

The most significant upgrades to the Solution Comp can be found at the back of the shoe. The Solution’s classic 3D heel cup has been replaced with a significantly softer, lower-volume heel. This new design provides greater control on technical heel hooks and compensates for the lack of sensitivity in the classic Solution 3D heel cup.

Perhaps more importantly, this new heel design also has a significant impact on the overall elasticity of the shoe. It conforms better to volumes and friction moves — found in abundance in comp climbing — while still retaining the Solution’s stellar edging ability. 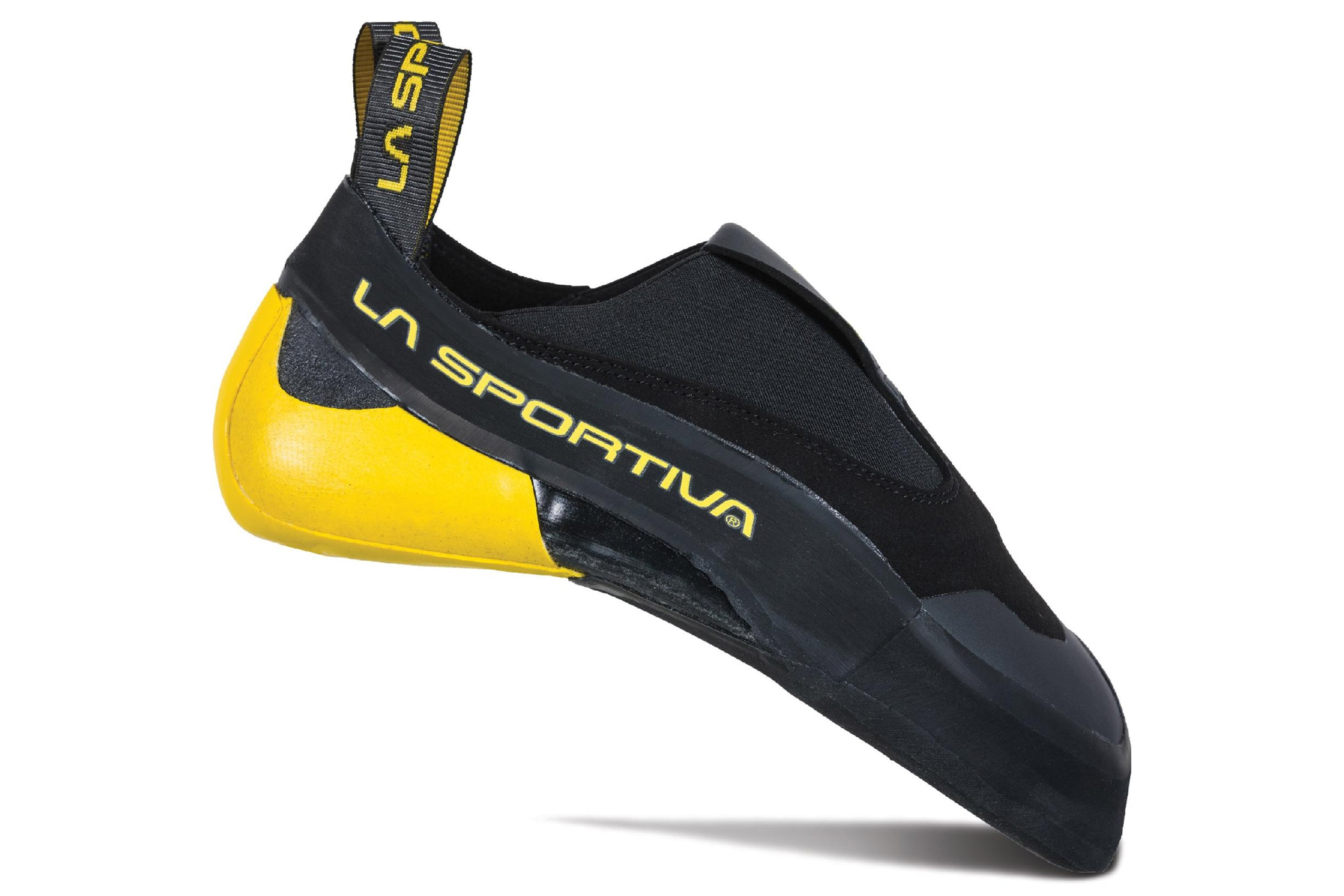 The Cobra 4.99 ($150) is the first climbing shoe built for the single-minded purpose of conquering the speed wall. This model is a refined version of the original Cobra, a shoe that has been a staple of the La Sportiva lineup for over 2 decades.

After shedding almost 20% of the weight from the original Cobra, the 4.99 is one of the lightest climbing shoes ever made, tipping the scales at just 170 g per shoe.

The main contribution to this weight reduction comes from the unconstructed heel and the replacement of the outsole with a half-sole of Vibram XS Grip2. La Sportiva also opted for a microfiber upper, a lightweight and durable alternative to the Cobra’s traditional suede leather.

The Cobra 4.99 has a layer of TPU in place of a traditional toe patch. As well as aiding with the overall durability, this counterintuitive design prevents drag against the wall as climbers propel up the speed route. This is a must-have unisex shoe for speed specialists. 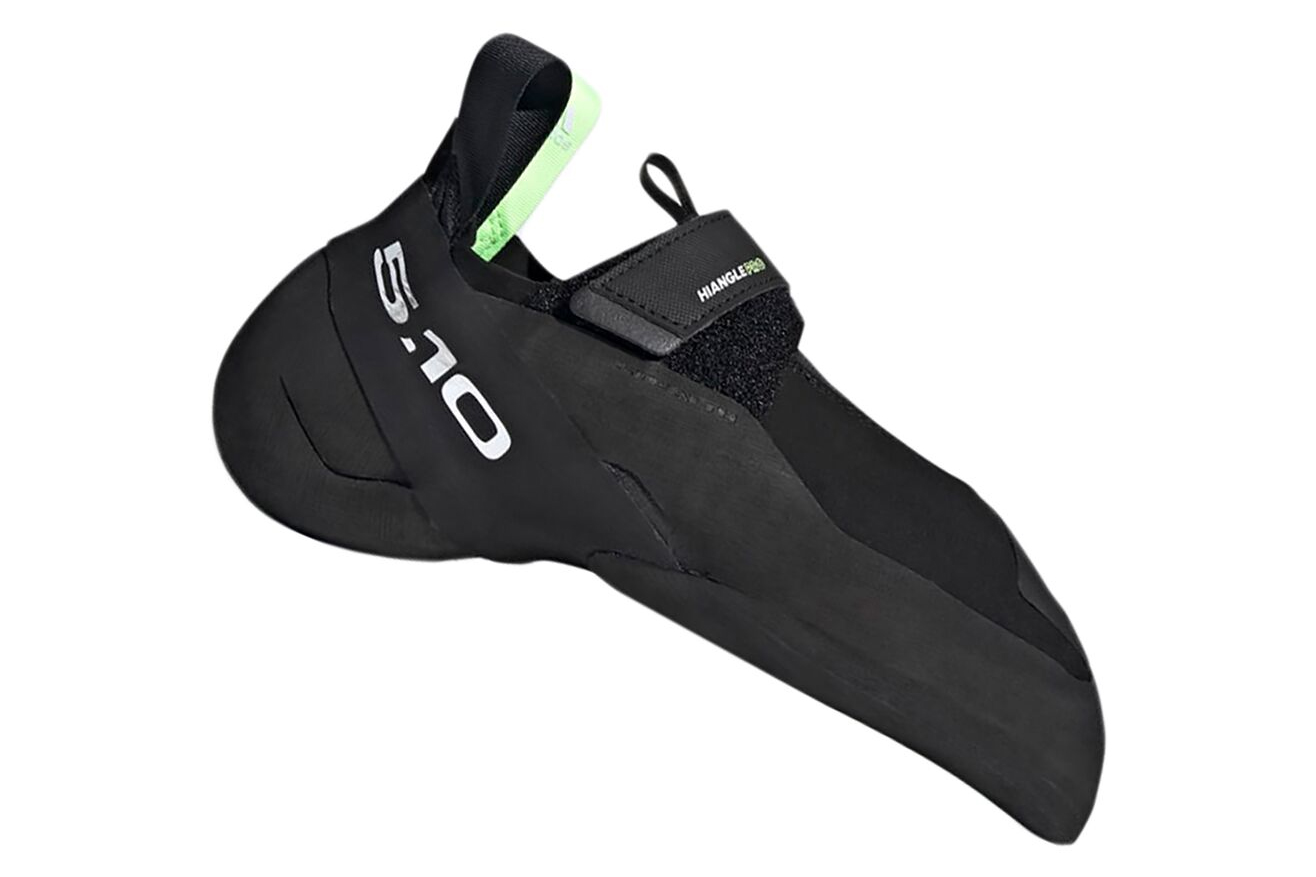 The Hiangle Pro ($159) is the highest performance model in the Five Ten range and the shoe of choice for the multiple world champion Janja Garnbret.

The shoe builds on the winning features of the classic Hiangle, using the same last and design style, with a host of new performance-oriented features thrown in.

The main upgrade is the seamless wrap-around outsole, similar to La Sportiva’s No-Edge technology. This gives the shoe a larger contact area on the inside edge that enables stability on volumes and compression moves, while maintaining the Hiangle’s original pointed toe for laser-precision edging.

A partial midsole is paired with Five Ten’s popular Stealth C4 rubber outsole, which tapers from 3.5 mm to 2.1 mm. This design allows the shoe to retain rigidity for edging, while enabling increased sensitivity compared to the classic model, making the Hiangle Pro the most sensitive shoe in the Five Ten range.

We’ve climbed in this one ourselves — check out our review. 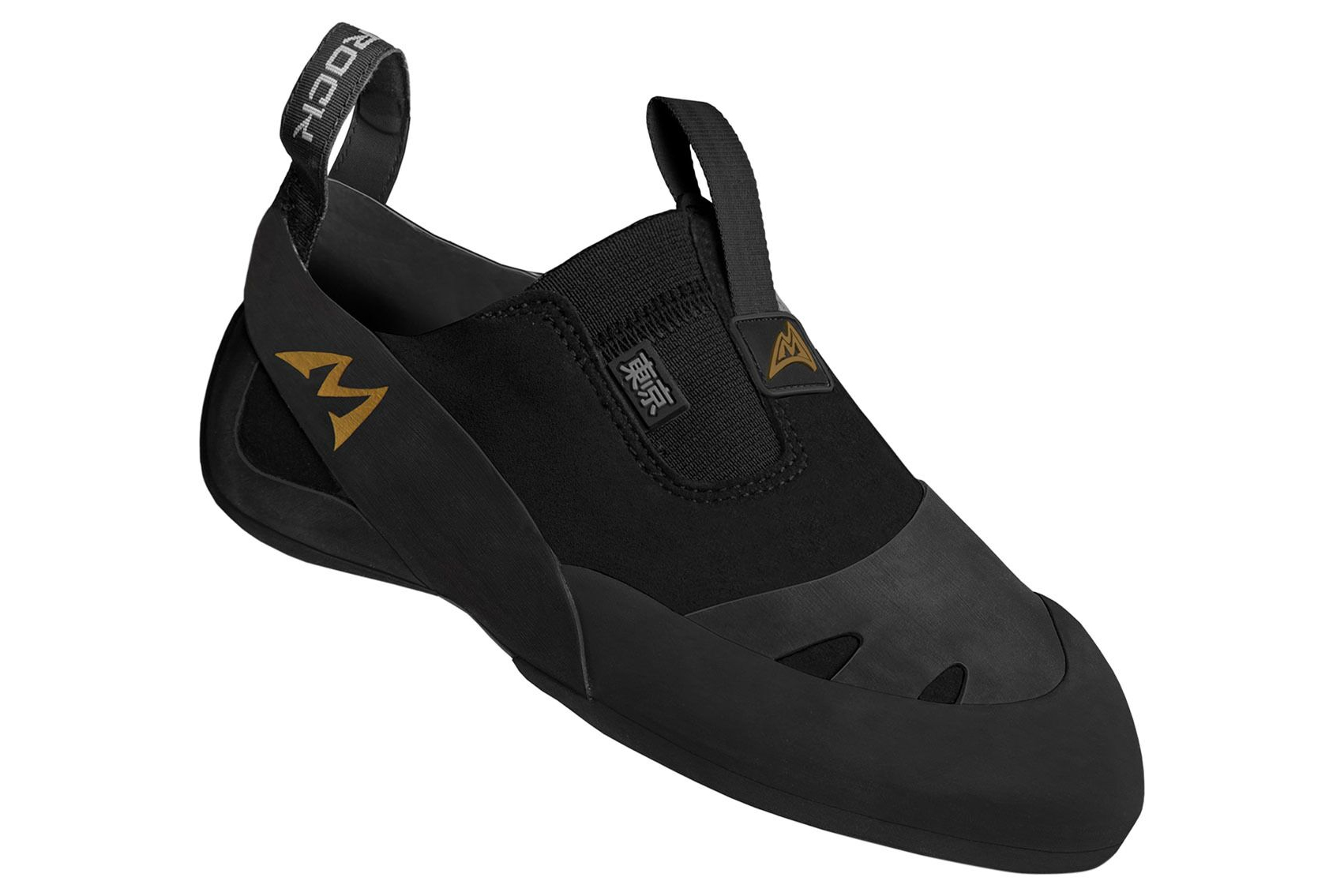 Of all the Mad Rock models, it is the Remora ($109) we expect to make the most appearances at the Olympic Games.

The Remora is Mad Rock’s answer to the La Sportiva Cobra, a moderate slipper with a flexible construction that is perfectly suited for speed climbing. Just like the Cobra, it too got a fresh revamp for the Tokyo Olympics. However, unlike its counterpart, these were purely cosmetic upgrades.

While the Cobra 4.99 has little use outside the speed wall, the Remora has the versatility to perform on a wide range of terrain and suit different climbing styles. The Science Friction rubber plays a large part in the Remora’s adaptability and is often touted as one of the standout features of any Mad Rock climbing shoe.

Mickael and Bassa Mawem have been part of the Mad Rock team for over 5 years and credit Mad Rock’s sticky rubber as one of the main reasons they opted to partner with the company. As Mickael mentioned, “The friction of Mad Rock shoes is crazy, for me, their shoes provide the best friction of any shoe brand.”

What Makes a Good Comp Shoe?

Sport climbing’s Olympic debut will take the form of a combined event that will see the climbers compete across three separate disciplines: bouldering, lead climbing, and speed climbing.

Although these three disciplines fall under the umbrella term of sport climbing, the diverse skill range required from the climbers — and their shoes — varies drastically across the disciplines.

For speed climbing, a discipline where a tenth of a second can be the difference between a glorious win or a devastating loss, climbing shoes need to be light and provide athletes with a glove-like fit to achieve quick, explosive foot placement.

Bouldering and lead climbing share a little more in common. Both often involve steep overhanging walls, more technical sequences, and a blend of micro-edges and friction foot placements. The most common requirements for bouldering and lead shoes include:

It’s not just the professional climbers that benefit from all this new shoe technology. The shoes mentioned throughout this article are ideal for tackling your hard sport projects, both in the gym and at the crag.

Make sure to tune in to NBC on cable or Apple and Amazon TV on August 3 for this amazing moment in sport climbing history, as years of preparation come to fruition for both the athletes and the climbing shoe manufacturers.

The Best Climbing Shoes of 2021

Aside from the ice climbers, mountaineers, and Charles Albert, every climber needs a pair of reliable climbing shoes. Read more…

The Best Climbing Harnesses of 2021

We found the best climbing harnesses of 2021. Whether you're sport climbing or mountaineering, we have you covered. Read more…