The books I enjoyed in February might have broader appeal than January's.  I read some new releases, but if you don't mind a wait you should be able to get them at your local library.  Others I read have been out a while so are readily available. 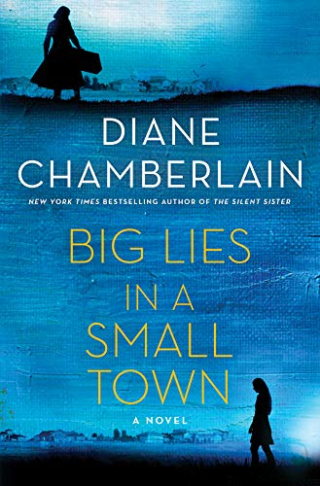 Anything I have ever read by Diane Chamberlain has been great.  Big Lies in a Small Town starts out in the present-day with former art student Morgan, who is in prison for a crime she didn't commit.  A mysterious visitor tells her she can get out of prison immediately if she agrees to restore a damaged mural from the 1930s.  She grabs at the opportunity, even though she knows nothing about art restoration.  She moves to a sleepy North Carolina town and discovers the old mural reveals a story of violence, prejudice, and conspiracy. The timeline flips back and forth between Morgan's restoration efforts and discoveries and the tale of Anna, the original artist who painted the mural.  This story will definitely hook you.  Four and half stars from me. 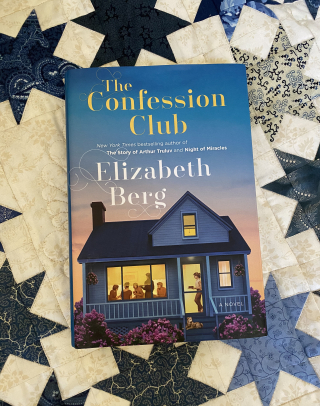 Elizabeth Berg is a new discovery for me.  She writes what I would call "women's fiction".  Her book The Confession Club concerns a group of friends who meet regularly for a supper club.  They share good food, conversations, recipes, laughs, and wine.  Things change one evening when one of the women shares an intimate secret.  The dynamics of the group are transformed and the meet-up becomes The Confession Club from that day forward.  Intimate confessions, stories of past misdeeds, and present insecurities are discussed by the women and much encouragement and advice are shared. Elizabeth Berg writes about friendship, support, and kindness.  Her books are full of little gems you will want to write down so you don't forget them.  Four stars. 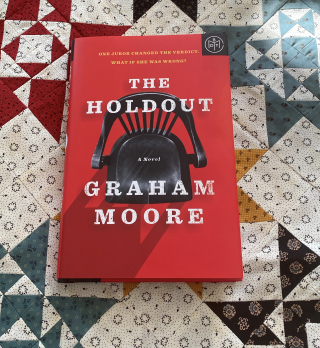 I really enjoyed The Holdout by Graham Moore.  It is a courtroom thriller about what should have been a slam dunk case for the prosecution.  Except for one holdout who persuades all her fellow jurors to change their verdict and let the defendant go free.  There is much backlash later regarding the jury's decision and Maya, the juror who changed the trial's outcome finds herself under fire.  Fast forward ten years and the former jury panel is called together for a reunion sponsored by a true crime tv show.  One of the former jurors says he has new information regarding the case that will change everything.  Only he ends up dead in Maya's hotel room.  All evidence points to Maya and she sets out to discover what really happened.  This story was suspenseful and definitely kept me glued to the pages.  Four stars. 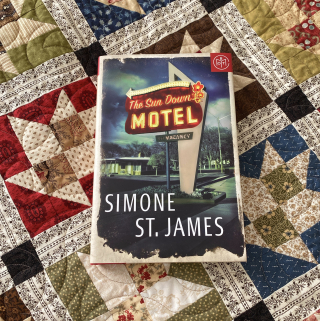 Oooh, this was a creepy one.  If you like ghost stories, The Sun Down Motel by Simone St. James will be right up your alley.  In 1982 Viv takes a job as the night clerk in a creepy run-down motel in an isolated area. (Do you have goosebumps already?)  The motel has an unhappy past that includes a number of mysterious deaths on the premises.  Jump ahead to the present day, where Carly is determined to find out what happened to her Aunt Viv, who disappeared shortly after taking on the job at the motel.  So what does Carly do?  Yup, she gets hired as the new night clerk at the Sun Down (where nothing has changed in 38 years) and figures she can solve the mystery.  Things are not at all as they should be at the motel, with strange voices, cigarette smoke when no one is smoking, doors opening and closing...you get the picture.  You won't be able to put this one down until you figure out what happened.  Almost four stars. 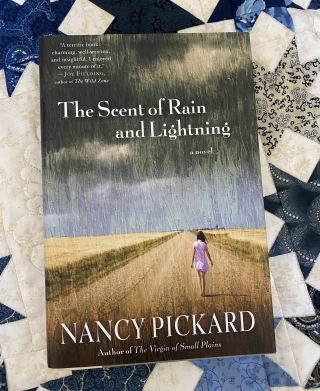 The Scent of Rain and Lightning by Nancy Pickard has been out since 2011, so you should be able to easily get your hands on a used or library copy. This family saga/mystery has been sitting on my To Be Read shelf all that time, and I finally decided to pick it up. Twenty-six-year-old Jody is living in the small town Kansas home where twenty-three years ago her father was murdered and her mother disappeared.  Billy Crosby has been tried and convicted of the crime and supposedly has been put away for life.  Except his conviction is overturned and he is coming back to town.  Billy's son Collin has become a successful attorney and has managed to prove that his father's trial was a complete sham.  Jody has managed her entire life to avoid Collin, but that is about to change. Jody's three rancher uncles try to shelter her but she is having none of it.  She is determined to get to the bottom of the matter and find out what actually happened to her parents all those years ago.  This book has definite Bonanza vibes, with the characters of the three rancher uncles reminiscent of the Cartwright boys.  The end was a twist I didn't see coming.  It was a good book for me.  Four stars.

A History of Loneliness by John Boyne was the best book I read in February.  I am a huge fan of Irish author John Boyne.  The book may not be for everyone, but I found the topic was handled with compassion and empathy. This novel concerns the period of time in the 1960s when it came to light that a large number of Catholic priests in Ireland had engaged in pedophilia for many many years and that the Church suppressed the cases and covered up their crimes against children.  The book is definitely a damning indictment of the Catholic church but seen from the point of view of a priest. Our main character, Father Yates is an honorable man, content for the most part with his role at a boys' school where he oversees the library and occasionally counsels the students.  Throughout his life in the priesthood, he sometimes notices things that don't seem quite right, but in his naivete, he says and does nothing.  You will be asking yourself a lot of questions if you read this book.  Is "see no evil, hear no evil, speak no evil" an acceptable moral defense?  What level of complicity and guilt do those who suspect evil but say nothing bear?  Beautifully written, thought-provoking, and a great character study of a man who finds himself living at a time of spiritual upheaval.  Five stars for amazing writing.

Other books I read last month that deserve mention are "Such a Fun Age" by Kiley Reid (a young African-American nanny is mistakenly accused of kidnapping her young charge- a thought-provoking book about race, privilege, and prejudice), "The Blinds" by Adam Sternbergh (a modern western/thriller about a town populated by criminals who have had their memories erased), "The Ghost Wall "by Sara Moss (a family joins an Iron Age reenactment group in Northern England that unearths some frightening behavior-think Lord of the Flies), and "The Tuscan Child" by Rys Bowen (not her best-I found the story contrived and predictable).

Let us know what your favorite reads of 2020 have been so far!  And if you have read any that I have mentioned, do share your thoughts.