There are a lot of nailers available on the market right now. There’s the roofing nailer, siding nailer, finish nailer, and pin nailer. You also have the staple gun, the brad nailer, and the palm nailer.

But if you’re planning to have your home remodeled or you want to add a new section to your home, then what you need is a framing nailer.

If you’re planning to purchase a framing nailer as a gift for yourself or a friend or family member and you don’t know one thing about them, then you’re going to find our framing nailer buying guide extremely helpful. We’re going to discuss what it can do, the advantages of owning one, and whether this is the right tool for that specific project.

We have also compiled a list of the best framing nailers available online and in your favorite hardware stores. Enjoy! 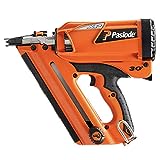 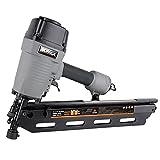 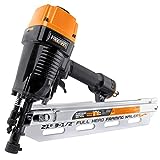 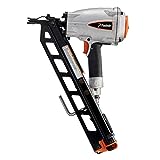 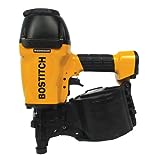 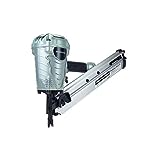 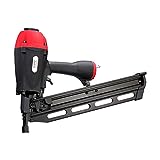 If you’re going to do a lot of work outdoors or you don’t have access to an air compressor, then the Paslode 905600 Cordless XP Framing Nailer is the ideal nail gun for you. This is a portable cordless framing nailer that is powered by a rechargeable lithium-ion battery and a fuel cell. The battery, fuel cell, and charger are already included in the package, so you don’t have to purchase them separately.

Its total weight is 7.2 lbs. While the manufacturer claims that it is lightweight, this is relative. What’s light for one person may be heavy for another. You also have to factor in the length of time that you’re going to work and the size of the project. The good news is that it is compact, so you can get it into corners and tight spaces when necessary.

Keep in mind that it can only accommodate a single strip of framing nails. It’s not as fast as the other Paslode pneumatic framing nailer in the list (this cordless nailer can shoot only two to three nails per second), but it performs well no matter the application.

The NuMax SFR2190 Pneumatic Framing Nailer is one of my favorite framing nailers thanks to its impressive performance and durable metal body that doesn’t crack or get scratched even when you accidentally drop it. There’s no need to get a hex key or other tools as it has a tool-less depth adjustment.

Keep in mind that this particular model is a 21° full head framing nailer. You can also purchase a 34° model that uses clipped head nails if your application calls for it.

The Freeman PFR2190 Pneumatic Framing Nailer is a 21º nailer that uses plastic collated full-head nails. If you’re looking for a framing nailer that fits your budget and performs well, then this is the right tool for you.

Loading the framing nails is very easy thanks to its high-capacity aluminum magazine. There’s no need to stop and load in the middle of a large project with a magazine like that.

Plus 30° Framing Nailer is the ideal tool if you’re a carpenter or a builder tasked with a lot of remodeling projects. This is not your ordinary framing nailer. The body itself is robust and built for heavy-duty applications. The lightweight aluminum magazine can accommodate a lot of framing nails (it uses nail sizes 2″ to 3-1/2″ nails), ensuring that you won’t need to stop and load every time it runs out.

It’s kind of heavy, so prepare your hand and arms if you’re taking on an extensive project. Handling the tool, however, is easy thanks to its rubber-molded hand grip.

This framing nailer, albeit durable and performs well, is very expensive. Plus, it’s not the ideal tool if you’re looking for something portable as it is always hooked on an air compressor.

The Bostitch N89C1 Coil Framing Nailer is one of the most unique tools we’ve reviewed so far. Instead of the usual long magazine, this one has a large round magazine where as much as 300 framing nails can be stored.

The tool’s performance is impressive, but so is the price. If you’re a hobbyist and not a professional, then there’s not much sense for you to purchase this tool.

Whether you’re nailing rafters or building a deck, you’ll find this Metabo HPT NR90ADS1 Framing Nailer an efficient and handy tool. This is a pneumatic framing nailer with a 30° magazine that accepts both offset and clipped framing nails.

Its body is made of durable metal, while the magazine is made of lightweight anodized aluminum.

The package includes a hose fitting, so you don’t have to purchase a compatible connector separately. The handle is rubber-molded which ensures a non-slip grip. This handle, however, is not my favorite as it is too slim.

If you’re looking for a good mid-priced tool, then this is it.

The 3PLUS H2190SP Framing Nailer is one of the best-selling framing nailers that are available for just below $100. If you’re a hobbyist who needs a budget-friendly tool for your occasional remodeling projects at home, then this pneumatic framing nailer is the ideal tool for you.

The performance of this framing nailer is impressive and it has been reliable even in large projects. It allows for tool-less depth adjustment so you can switch from flush nailing to countersink in a sec.

My only complaint is that it is heavy (weighs almost 11 lbs). Your arms can easily turn to jelly if you’re going to use it all day long.

A framing nailer is a handheld power tool used to nail together wood and other kinds of materials. It is also known as a framing nail gun or simply, a nailer.

The pneumatic models of this tool are hooked to and powered by an air compressor. Some cordless versions, on the other hand, are powered by a fuel cell that contains gas (such as propane or butane), a lithium-ion battery, or a combination of both.

While the popularity of framing nailers has surged among DIYers and hobbyists over the years, it is still, by and large, a professional’s tool because of its sheer size, power, and to some extent, its prohibitive cost.

Framing nailers have different power sources, and the type of power source it uses will determine whether it’s going to be a cordless or corded tool.

Pneumatic framing nailers are powered by compressed air. These tools are ideal for extensive framing tasks and other high-volume projects. If you already own an air compressor or if you have access to one in your job site, then this is the ideal tool for you.

But being connected to a hose can seriously hamper your mobility. If you want a framing nailer with the same powerful performance but you also want it to be portable, then cordless nail guns are your best option.

Cordless framing nailers are powered by gas (butane or propane) stored in a fuel cell or a compatible lithium-ion battery. But there are models available right now that use a combination of both.

The downside? Unlike pneumatic framing nailers, fuel and battery-powered ones tend to run out of juice in the middle high-volume tasks.

You’ll notice that most of the nail guns sold online or in your local hardware stores have a stick magazine. These are made of aluminum and positioned at a certain angle. Check out this article for a more detailed explanation of why framing nailers have different angles.

Loading a strip of nails into a stick magazine is very easy. It is also less bulky than a coil magazine, so it’s better for toe-nailing or nailing at a certain angle. The only downside is that it can only accommodate a limited number of framing nails.

Coil magazines, on the other hand, can accommodate more nails compared to stick magazines. The nails are coiled into a circle and loaded into a round magazine. The downside? Loading coiled framing nails takes a lot of practice before you can perfect it.

Framing nailers have two types of triggers: the contact firing and the sequential trigger.

With contact firing (also known as bump firing), the user has to pull the trigger and press the safety tip against the work surface at the same time to discharge the nail.

Many DIYers and workers like this type of trigger because it’s faster and more efficient. All you have to do is “bump” the safety tip against the work surface while pressing the trigger and you can drive multiple nails in mere seconds.

The problem with contact firing is the tool is prone to double firing. It can sometimes fire a second nail on top of the first one. The second nail can recoil off the first nail and can easily hit you or someone else working or standing nearby. It is also very easy to injure yourself or others if you have your finger on the trigger and accidentally bumped the safety tip on some part of your body or someone else’s.

The second type of trigger is sequential firing. In this type of trigger, you have to press the safety tip to the work surface first then pull the trigger to discharge the nail.

You have to press the safety tip to the material then pull the trigger again to drive another nail. This type of trigger reduces the chances of accidental double firing and is safer compared to bump firing.

My choice for the best framing nailer is Paslode 905600 Cordless XP Framing Nailer. While I like the sheer power and speed of pneumatic nail guns, this particular Paslode framing nailer performed just as well and often even better than its air-powered counterparts.

Connecting hardwood all day long is a piece of cake for this beast. Using it in the middle of summer? No problem. Using it in a frigid environment? You can be assured that it can do what needs to be done.

It is powered by a lithium-ion battery and a gas fuel cell. This dual power source ensures a longer run-time. In case you run out of power, you can always have a back-up battery and fuel cell to keep you going.

This cordless framing nailer is limited by its power source. But if you’re mounting a ladder and you don’t want anything to get in the way while you work or you just want to be safe, then this is definitely the way to go.

There you have it. Our list of some of the best framing nailers for a wide-range of applications and budgets. Happy shopping!

Other Great Articles to Read: